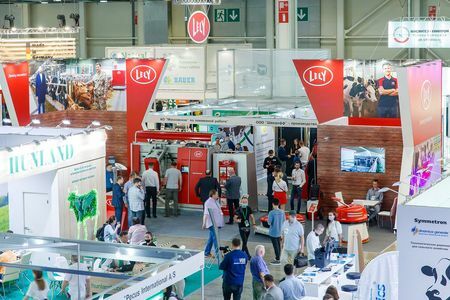 (DLG) DLG’s AGROS, the international trade fair for animal husbandry, breeding and fodder production in Russia, opened its doors from 18 to 20 May 2021 for livestock professionals. Held in Moscow at the international exhibition centre "Crocus Expo", the trade fair attracted manufacturers and suppliers from Russia and 22 other countries, offering solutions to visiting industry professionals. A comprehensive range of technology, equipment, products and services for modern cattle, pig, poultry, goat and rabbit production, aquaculture, including forage production and feed preparation, awaited the professional visitors. Over 6,000 professional farmers visited the trade fair.

Opening the AGROS trade fair, the Deputy Director of the Livestock and Breeding Department of the Russian Ministry of Agriculture, Gennady Shichkin, delivered the official greeting on behalf of the First Deputy Minister of Agriculture of the Russian Federation, Dzhambulat Khatuov. He noted the important role of the AGROS trade fair as a platform for exchanging experience between industry specialists and professional discussions between suppliers of modern solutions for the industry, investors and government representatives.

In his welcoming speech, the Managing Director of DLG RUS, a subsidiary of the DLG (German Agricultural Society) and the organiser of the trade fair, Gennady Mindru, thanked the participants for their commitment in coming to the exhibition during a busy period in farming. Mindru clarified that the next AGROS trade fair would take place as normal, with the selected dates of 25 to 27January 2022, being a more convenient time for agricultural producers.

“This year at AGROS we noted that the world-leading pig and cattle breeding organizations with their innovative genetics and milking equipment manufacturers with robotic milking technology generated a lot of interest among industry professionals at their booths,” commented Mindru.

“Russian farmers recognize the importance of high quality feed for the productivity and the longevity of their animals. There is a definite growing interest in the wellbeing of the animal and in improving the quality of the end product which can be achieved by factors like high-quality feed. We noted that the feed sector had expanded both in terms of exhibition and the offering, which means exhibitors are meeting the demand of professional farmers in Russia,” concluded Mindru.

The trade fair attracted a higher contingent of visitors from neighbouring countries when compared to the last event. High level representatives from Armenia, Azerbaijan, Belarus, Kazakhstan, Kyrgyzstan, Uzbekistan representatives of the Eurasian Economic Commission attended the exhibition and took part in different business events at the exhibition.

At this year's AGROS, the focus of the business programme was animal health, a topic identified by DLG RUS as one of interest to the professional visitors. Numerous presentations explored production factors involving animal health, including feed production, genetics, housing conditions, feeding, hygiene, veterinary medicine and biological safety, waste disposal, management, processing, logistics and marketing. New and highly attended business events were dedicated to such topics like decentral energy supply, agritourism and organic aquaculture and organic beekeeping. A total of 52 events in suitable interactive formats covered a range of relevant topics from contributors consisting of some 250 leading Russian and international experts. A selection of events from the Business Programme was also offered online with viewers being able to connect via the internet.

Three gold and seven silver medals were awarded to companies presenting the most innovative solutions in the field of animal and feed production. An additional 10 products received the Best Product Award, which is a distinction awarded to products that are highly suitable for the Russian market. The independent jury consisted of industry experts evaluating entries using criteria such as practical significance, contribution to animal welfare and the environment.

German Ministry of Agriculture at AGROS

The German Federal Ministry of Food and Agriculture (BMEL), participated with a German country pavilion, in which 15 German manufacturers presented their “Made in Germany” solutions for animal and feed production.

As part of the three day AGROS trade fair, interested livestock specialists were offered the opportunity to visit an automated dairy farm demonstration on the “Lenin State Farm”, which houses 500 heads of cattle. The farm excursion took place on the second day of the trade fair and resulted in valuable feedback from participants that will positively influence the focus areas of the next trade fair.

The AGROS fair is organized with the support of the Russian Ministry of Agriculture, the National Associations of Milk Producers, Poultry Breeders, Pig Breeders, Beef Producers, Cattle Breeders, the National Bio-Union, the Skolkovo Innovation Center.

Active in Russian since 2007 with the first edition of the AgroFarm exhibition, DLG founded its subsidiary DLG RUS in Moscow in November 2015. DLG International has subsidiaries in 12 countries.